Baby Steps Towards a Circular Economy in New York

My daughters and I recently went to the the Corning Preserve in downtown Albany and picked up eight garbage bags of water bottles, styrofoam cups, plastic totes, candy wrappers, snack containers, car parts and other trash that would otherwise have blown, tumbled, fallen or drifted into the Hudson. We were one group among the 120 sites participating in Riverkeeper’s annual Sweep along the river. Pretty cool.

However, at the end of the day, there was still much more garbage left behind that we could not retrieve, not to mention the untold quantities of litter polluting virtually every community in America. Bummer.

Aside from the warm feeling resulting from a single service day or the discouragement from contemplating the scope of trash left behind, it would be more fruitful to ask why so much garbage blights our land in the first place, and what can be done about it in a sustained, systematic way.

Industry has funded public service information campaigns imploring individual consumers to “Give a Hoot, Don’t Pollute,” and “Don’t Mess With Texas.”  Clearly, those campaigns are insufficient, at best reducing the amount of litter by some small fraction. Human nature being what it is, people will do what is easy, cheap and, even more, profitable. Right now, it is easy for consumers to throw their refuse out the car window or drop it on the ground. And it is cheaper for manufacturers and retailers to leave it up to the consumer to dispose of the products and packaging that corporations insert into the stream of commerce.  The end result is the degradation of our common assets of clean water and pristine lands, at no cost to the industries that are the source of the degrading products and packaging. We, the public, are subsidizing polluters, without our consent.

A better solution would be to restructure our commerce to a circular, closed-loop economy, where commodities are valued, recaptured and reused, and industry creates products with recycled instead of virgin materials. A circular economy has many features, including: taxes on inputs that cause “externalities” or negative side effects, such as a price on carbon in fossil fuels that emit greenhouse gases; deposits on consumer goods to promote returns and recycling; and Extended Producer Responsibility, in which a producer is responsible for a product through the post-consumer stage, such as the requirement that electronic retailers accept and recycle old phones, TVs and other e-waste. A closed-loop economy also promotes formal and informal sharing, such as Capital Carshare, maker spaces, bike share programs and freecycling. 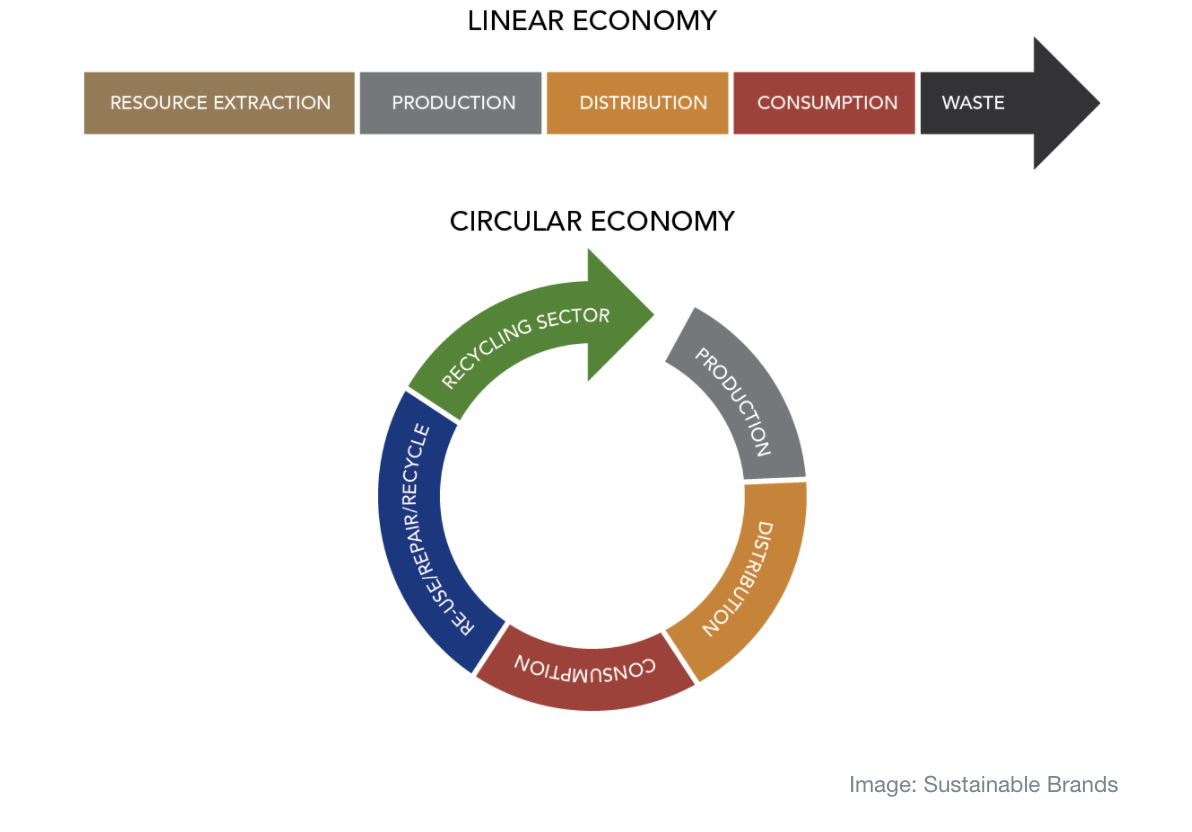 If that sounds high concept, it actually is the same principle behind familiar bottle deposit laws and industrial reclamation of scrap metal from old cars and appliances.

The problem is, for the vast majority of consumer products, industry won’t make these structural changes voluntarily.  We, the public, must require manufacturers and retailers to do it.

At the state level, two measures have already been proposed and need public support. The New York legislature is currently considering a comprehensive bill (S.7760/A.9953) to ban plastic carryout bags and impose a fee on paper and other bags to promote reusable totes (and Governor Cuomo has proposed a separate bill with a more narrow ban on plastic bags only).  Unfortunately, the 2018 legislative session ended without adoption of any bill to curb plastic bags. Advocates and the bill’s sponsors hope to take up the measure again in January 2019, when the New York Senate will have some new members after elections in November, and possibly a more environmentally-friendly (i.e. Democratic) leadership.

Additionally, the New York Independent System Operator and the New York State Department of Public Service are reviewing proposals to add carbon pricing in the wholesale energy market (NYS DPS Matter No. 17-01821, In the Matter of Carbon Pricing in New York Wholesale Markets). By accurately reflecting the cost of air pollution and greenhouse gases, carbon pricing would prevent fossil fuels from continuing to enjoy an unfair price advantage over renewables and would provide a price incentive to manufacturers to use more sustainable materials.

Individual and group clean-up efforts such as the Riverkeeper Sweep are meaningful but by themselves are not a long-term solution to the massive pollution problem we all face. Supporting the plastic bag bill and carbon pricing are two steps we can take today to start moving to a truly sustainable economy and environment.